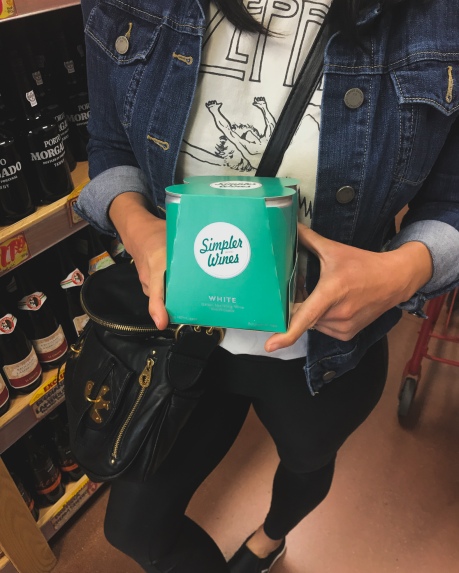 Ah Wednesday! I am really excited about this Wine Wednesday because A. It’s wine in a can and B. It’s cheap! I stubbled across Simpler Wines this past weekend at Trader Joe’s and decided to give it a try. G was quick to scoff at it saying that this will probably be the worst wine I have ever had, and I am so happy to be able to prove him wrong 🙂

He thought that this wine was produced by the same people who make Simpler Times Beer which he said was the worst beer that he has ever tasted, but this wine is actually produced by Trader Joe’s.

They have three different variations of this wine, the White that I tried, Rose and Peach. They come in a four pack and are only $3.99! For the price of this wine, I cannot believe how great it is. I had it on Sunday and usually will only have a glass but it was so good I had two cans! The White wine is so light and refreshing with a hint of sweetness. It is effervescent which I like and it would be the perfect drink for the summer. I highly recommend grabbing a four pack next time you are in Trader Joe’s.